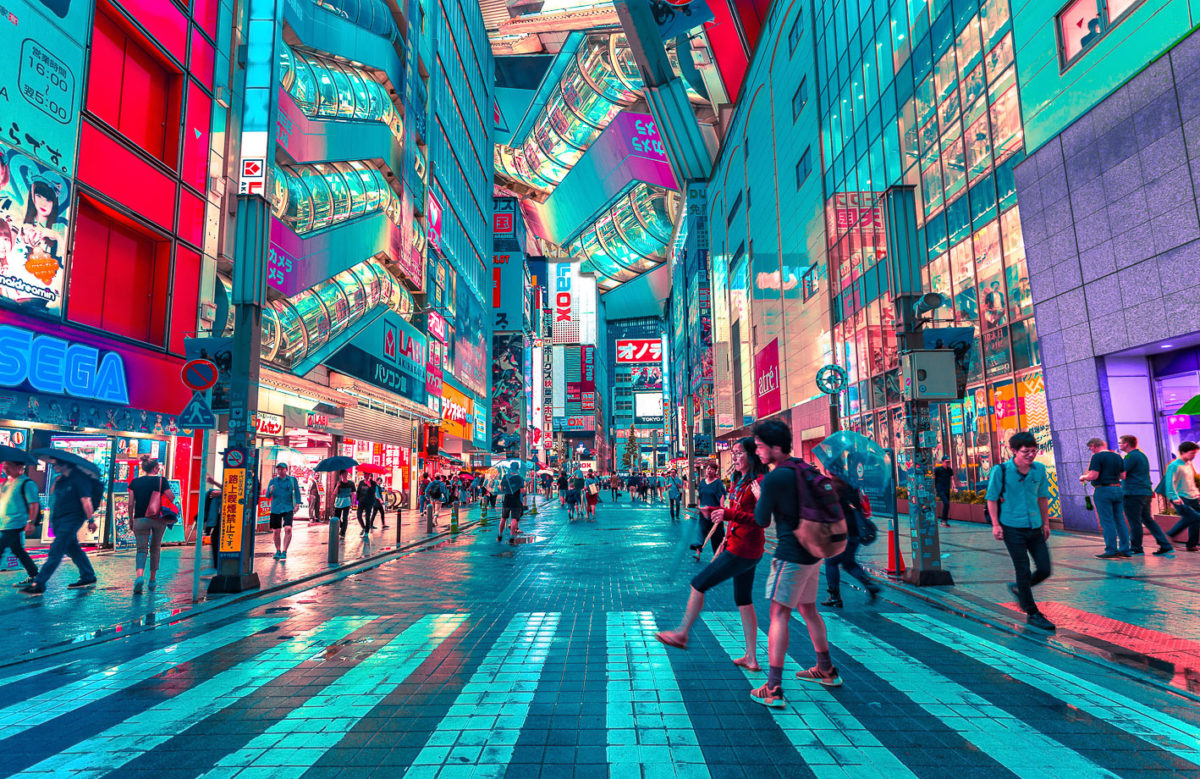 In the ’00s I made a visit to Japan to visit old friends I made when I lived there in the ’90s. To my surprise, an old friend of mine handed me a bag of magic mushrooms! Due to a loop-hole in the law, they were being sold legally in head shops. Of course, this loop-hole was quickly closed, but before this was achieved, young Japanese took full advantage and magic mushroom use was going through the roof! My visit just happened to luckily coincide with this boom.

For an introduction to these powerful psychedelic fungi, read about my magic mushroom experience in San Jose del Pacifico in Mexico, where they are sold openly in a store on the main street and all the houses are adorned with murals of the sacred fungi.

My friend dropped me in the hip shopping district of Harajuku. Harajuku is a trendy and fashionable area popular with hip youngsters in the Shibuya district of central Tokyo.

Note, that I had never lived in Tokyo and didn’t know my way around at all. The city is massive and can be quite intimidating. This is due to its vast size and the baffling Japanese street system, which is impossible for foreigners (or even Japanese for that matter!) to comprehend. Note also that this was in the days when smartphones and mobile internet were in the their infancy. So, no Google maps.

I went to McDonalds, bought a burger, put the magic mushrooms in the burger and ate it. I then wandered round the streets and hi-tech shopping malls of Harujuku. As the mushrooms started to kick in, I started to get disoriented and overwhelmed by the sensory overload. Imagine Lost in Translation magnified by 100. It was quickly becoming too much to handle and I had to get the hell out of there. But where? I had no idea where I was or how to escape the urban jungle.

I stumbled out of a shopping mall and crossed a busy street, suddenly finding myself facing a long white pebble path through a row of trees. People were walking along this path. I had no idea where it lead, but thought I had nothing to lose, so started to follow them. There was a high concentration of foreigners on the path, possibly tourists. It did not occur to me what on earth the reason for this could be.

The path lead to a huge and magnificent shrine. The mushrooms were starting to kick in quite hard and I started to feel faint in the near 40 degree summer heat. I had to sit down to recover and started to have these bizarre aural hallucinations, something like a helicopter but slowed right down. I looked up and realised it was a geriatric Japanese guy in a uniform attempting to speak English with me. It was hard to decipher what he was saying. I finally realised he was trying to tell me I was sitting on the sacred doorstep and had move my arse off of it and on to a neighbouring park bench.

This was a bit too much to take and I had to get out of there. I chose another gate to exit and suddenly found myself alone in a jungle. I felt like I had been transported to some remote part of South East Asia. I wandered through the jungle completely alone surrounded by exotic flora with not a sound except the singing of birds and humming of bees.

I came out of the jungle and into a clearing. It was a huge deserted field with a path running through the middle of it, surrounded by a forest. How this field came to be there and completely empty, did not occur to me in the slightest. I was desperate to lie down somewhere in the shade. In one corner of the field was a tree. Perfect I thought and went to step from the path onto the grass. I suddenly noticed there was a small fence to step over with a sign in English and Japanese: “Don’t step on the grass!” I thought, fuck it, there’s no-one around, no-one will see me and went to take a great big step on the lawn when a voice started screaming at me: “Don’t step on the grass!!” I turned around and there was no-one there! I then realised the source of the voice. It was a pre-recorded message coming from microphone on top of a pole. This completely freaked me out and I had to get the hell out of there.

Finally, I emerged from the field into a massive park which was this time, thanks goodness, full of people. I was back in the real world! I found a nice shady tree to sit under and chill. I was observing young Japanese in the park chilling out and playing games. I was sure they were all tripping on mushrooms too. Otherwise, it would have been just too wierd!

Later, I found that I was in none other than Yogogi park. One of the largest parks in central Tokyo, it is the hangout of many of Tokyo’s bizarre sub-cultures. So, it was no wonder there were so many freaks there that day. The shrine I happened to stumble upon was none other than Meiji shrine, the most famous shrine in Tokyo and one of the biggest tourist attractions. The jungle and field in the forest are the grounds of the Shrine adjacent to the park. How I suddenly found myself alone in these areas on that day is a mystery. But this is the paradox of Japan. One minute, you can be surrounded by thousands of people and bombarded with all kinds of stimuli and the next, you can be alone in a tranquil little pocket of nature.

Photo by Jezael Melgoza on Unsplash.