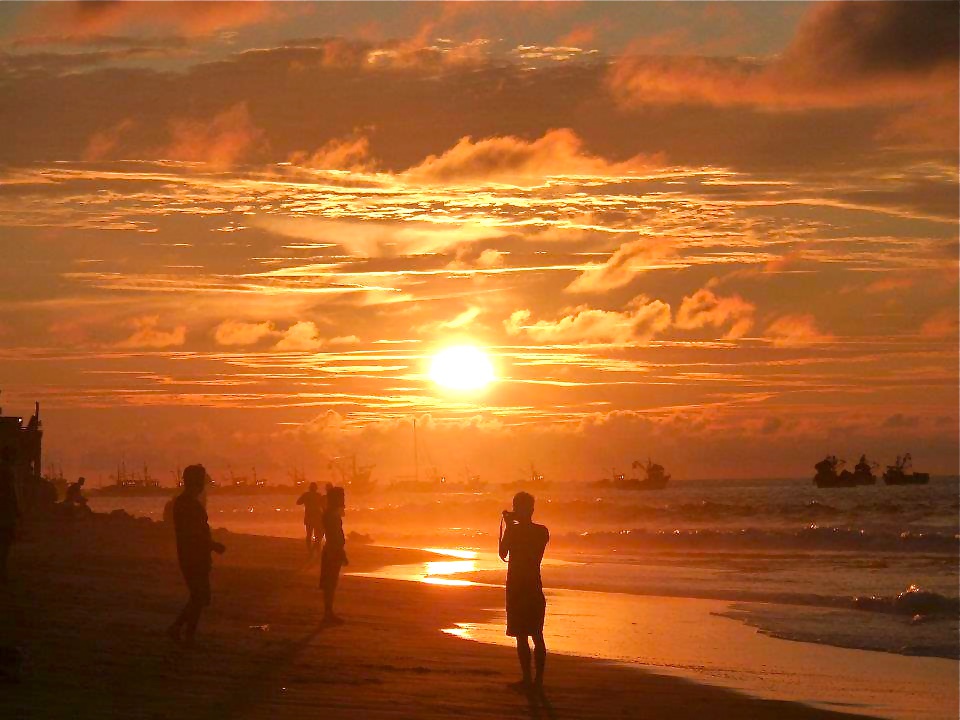 The two most popular surf towns on the Pacific Coast of South America – Mancora is Peru’s only real beach resort and; Montañita, after the Galapagos Islands, one of the most popular beach destinations in Ecuador. Which should you chose? Or both? Here comes the Mancora vs Montañita smackdown!

Mancora is in the north of Peru near the border with Ecuador and is reachable from both Guayaquil (5hrs) and Lima (14-16hrs) by bus and by plane from Lima. However, as there is no airport in Mancora, you have to fly to either Piura in the south or Tumbes in the north and then bus it or take a taxi. I advise strongly taking a taxi if you can find anyone to share at the airport, as it’s quite expensive. It’s worth it however, as you will save loads of time and stress.

Getting to Mancora from Guayaquil in Ecuador can prove to be quite a challenge. The border between Peru and Ecuador is one of the dodgiest there is, with plenty of unscrupulous sharks waiting to relieve you of your backpack or wallet. I met one tourist who was kidnapped there. She was taking a bus from Mancora to Guayaquil. She bought the ticket from a travel agent and waited there for the bus, as there is no bus station in Mancora. When the bus mysteriously failed to appear, she was ushered into a collectivo (small van servicing local routes) going to the border. When she got out at the border, there was a van there waiting for her and she was forcibly taken to a warehouse. Luckily for her, she escaped unscathed with all her luggage only having to pay a small “protection” fee. There are international buses that will get you over the border safely without much fuss. They stop at immigration on the Peru side and wait for you until you get your exit stamp, drive over the border and repeat the process at immigration on the Ecuador side. But beware also agents from the bus companies. They work on commission, so it is in their interests to sell you the most expensive ticket, so always check the date on the ticket after purchase but before leaving the agency.

Mancora the town is split in the middle by the Pan American highway which forms the main street. It is a pretty dusty, shambolic kind of a place and you don’t get the impression they have made much effort to improve it to attract more tourists despite its reputation as being Peru’s top beach destination. It has a decent enough beach, but beware of the strong surf – there were several drownings while I was there. A much nicer beach with a better view of the sunset is Las Pocitas, a short motor taxi ride south of Mancora. Mancora is just surrounded by pretty ugly desert. Once in a while it rains and suddenly there is green everywhere.

Montañita has a really nice long beach and one of the most beautiful sunsets I’ve ever seen. It is also surrounded by jungle, making for more picturesque. The town has a nice hippy vibe to it, but is more touristy and can get quite noisy, especially at night. So, if you are not so concerned about nightlife and a more laid-back vibe is more your thing, then maybe better to stay in Mancora.

The nightlife in Mancora is quite disappointing. There is a strip of bars along the beach playing the usual rubbish you find in Latin America – reggaeton, cheesy R&B, etc. These close down at 3am. Afterwards, there is usually a private party going in some bar somewhere behind closed doors. Some of the hostels also have full-moon parties. I went to one and it was lame with very heavy-handed security. You couldn’t go to the bathroom without some knucklehead following you. There is one half-decent psy-trance club there, but it is only open on weekends during the high season.

Montañita, on the other hand, has some really decent nightlife. In addition to cheesy bars, there is also live music and some proper clubs playing decent music. For example, the Lost Beach Club and the Dharma Beach Club which regularly feature touring DJs. I saw Tale of Us play there before they were famous.

Both towns are top surf destinations offering conditions suitable for both learners and advanced surfers. Pay attention to the lineup, as it can get quite territorial. Both destinations can get quite crowded on the weekend. While in Montañita, there was a major surf competition which culminated in a beauty contest on the beach. The whole town was full on the weekend, with hundreds of people sleeping on the beach

Both towns are surf destinations, so you can bet that both are brimming with tanned, toned and lean surfer bodies and their groupies. In summertime you also get plenty of hot tottie in the form of young south american backpackers, especially from Argentina and Chile. However, due to Montañita’s close proximity to Guayaquil and its reputation as a party town, it also attracts plenty of sexy people from Ecuador’s largest city.

Both towns have great and affordable eating options. Montañita has a greater variety of eating options, including vegetarian and healthy options. It is more touristy, while in Mancora you can find more cheap local Mom and Pop establishments serving up good decent seafood and ceviche at lunchtime. Although you can find Ceviche in Ecuador too, in Peru it absolutely rocks, so Mancora should win on this basis alone. Mancora also has two excellent restaurants serving asian/peruvian fusion dishes – a little pricier, but reasonable by western standards for this level of quality.

Both towns have a wide range of accommodation options to suit every budget, from basic bungalows and camping to nicer hotels or boutique and chain party hostels. As with most surf resorts, beach front property commands a higher premium, so unless it’s an absolute showstopper for you, I would save my pennies and stay behind the beach, as you’ll never be more than a few minutes walk away anyway. One thing you have to be careful of in Montañita however, is that in the high season it can get pretty noisy, even in the daytime. Some local tourists bring huge sound systems to their hotels, get drunk and blast reggaeton and r&b hits all day, so better to stay just outside of town and walk in to the centre.

For a chilled out stay in Mancora at a very reasonable price, I recommend the Casa Naranja.

Generally speaking, these beach resorts full of tourists and police are much safer places than larger cities in Peru and Ecuador. That said, you need to exercise caution like anywhere. Stick to the main road and well-lit tourist areas at night and never buy anything from the motor taxi drivers – police are always looking for an opportunity to shake down some tourists and make some pocket money.

It would seem that on paper, Montañita edges out Mancora in the Mancora vs Montañita smackdown. I had a great time in Montañita, but after a week, I felt I had to get out – too much noise and temptation. Mancora, on the other hand, is a bit more chilled – I preferred the vibe there and ended up going back again and again.