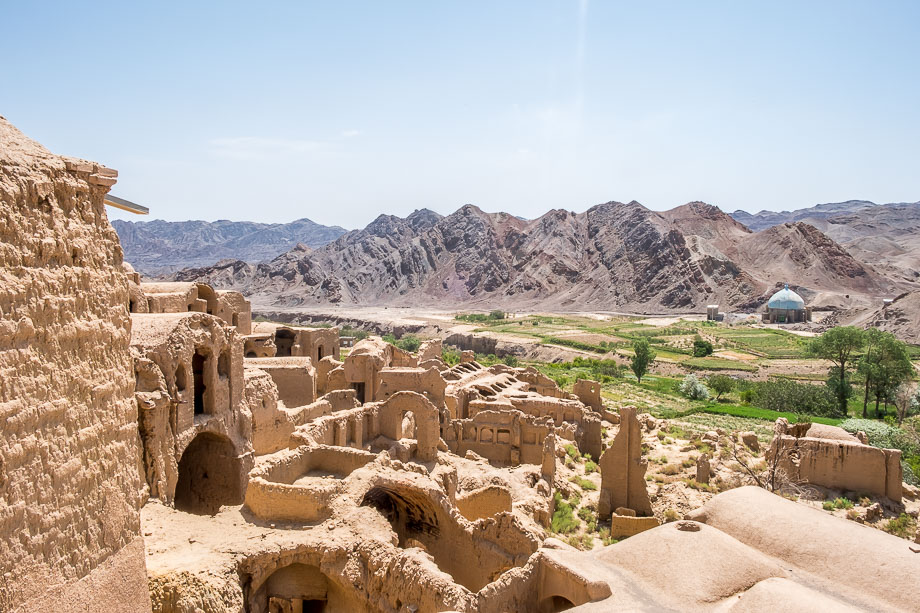 Yazd is a desert city and popular tourist destination in Iran. It has a history dating back thousands of years and it made almost entirely from Adobe.

Due to its severe summer climate, it has developed a unique architecture: so-called “Wind-catchers”, a natural ventilation system. They are towers facing the wind which funnel air downwards to cool the interior of a house.

The majority of the population is Muslim, but there is also a large Zoroastrian minority. Zoroastrianisam is a ancient monotheistic religion, practiced mainly in India and Iran. They practice a cult of fire and you can find a fire temple in Yazd. In it, you can see the Rolls Royce of fires, the “Atash Behram” or, the Fire of Victory.

Yazd also features the Masjid-e Jame (Friday Mosque) with the highest minarets in the country. Another attraction is the Tower of Silence, where dead bodies were traditionally left to be picked off by vultures.

Nearby Yazd, you can visit the mud city of Kharanaq; Chak Chak, a Zoroastrian temple on the side of a mountain; and 4000 year old Narin Castle in Meybod.

While in Yazd, I accidentally stumbled upon a gym where an ancient sport ritual called “Varzesh-e Pahlavani” is performed. It’s a kind of a performance/workout which involves lost of spinning around and twirling of giant heavy bowling pins, without any actual physical hand to hand combat. I was told to come back at 5pm for the performance. Thinking I had accidentally discovered some unique and obscure cultural experience, I was disappointed to find the room packed with groups of elderly French and German tourists.

I stayed in a small village about a 20 min drive outside of Yazd, called Taft. This proved to be a wise decision, as Taft is a peaceful and beautiful village surrounded by mountains and famous for its pomegranate gardens. I went crazy on the pomegranate juice. I stayed at the Nartitee Ecolodge. It’s a historic house run by a young Zoroastrian couple originally owned by their grandfather. The place is full of charm and the hospitality is unbeatable. I couldn’t eat enough of the amazing Iranian food there.