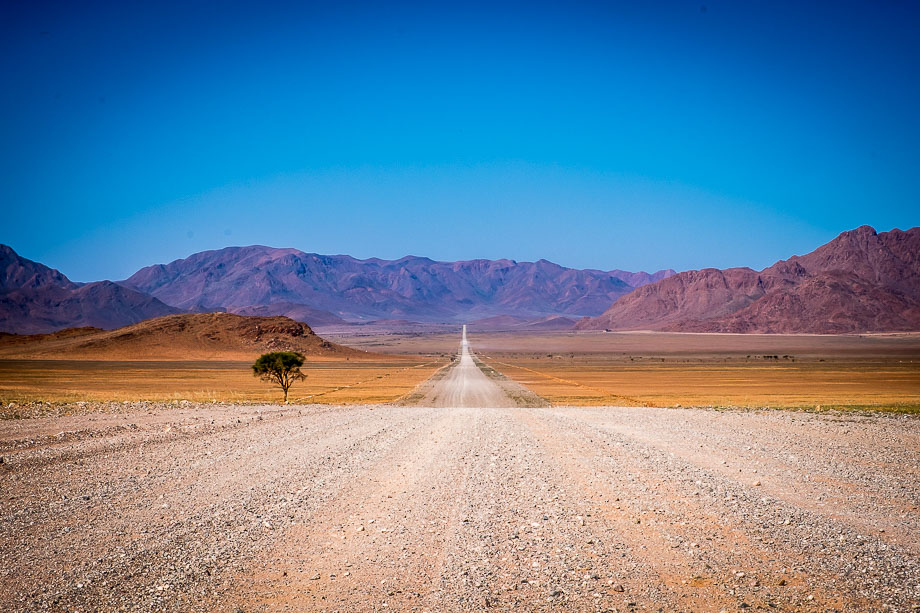 The second leg of our epic road trip took us from Sessriem to Lüderitz, the former German colonial town on the Atlantic coast.

From Sessriem, we took the C27 through the Namib Rand Nature Reserve, then followed the D707 to the Tiras Mountains where we stayed one night at the Namtib Desert Lodge. The next day we continued south to Aus, then driving the paved B4 to Lüderitz.

The landscapes in Namibia are out of the this world and continually change as you drive south. Roads are of varying quality and we drove for hours without seeing other traffic. It seems each farm is a good 30min drive away from the next.

As the distances are so vast, it is recommended to fill up at every possible opportunity and we almost paid the price for ignoring this advice as the gas tank started flashing empty. Luckily, they sold us some diesel at the lodge to keep us going.

At the campsite that evening, we had some uninvited guests. Horses were roaming free and came in to help themselves to our dinner. Wild horses are also visible on the road from Aus to Lüderitz.

Lüderitz is a sleepy port town founded in 1883 and named after a German, Adolf Lüderitz. There was a German concentration camp there (Shark Island) and the buildings and streets feature German names.

Following the discovery of diamonds in 1909, a new town Kolmanskop was founded. However, after the German defeat in WW1, the town started to decline as diamond mining moved away to more profitable locations. It is now a ghost town, where guided tours of the abandoned buildings are offered.

Read the next instalment of our epic road trip here.