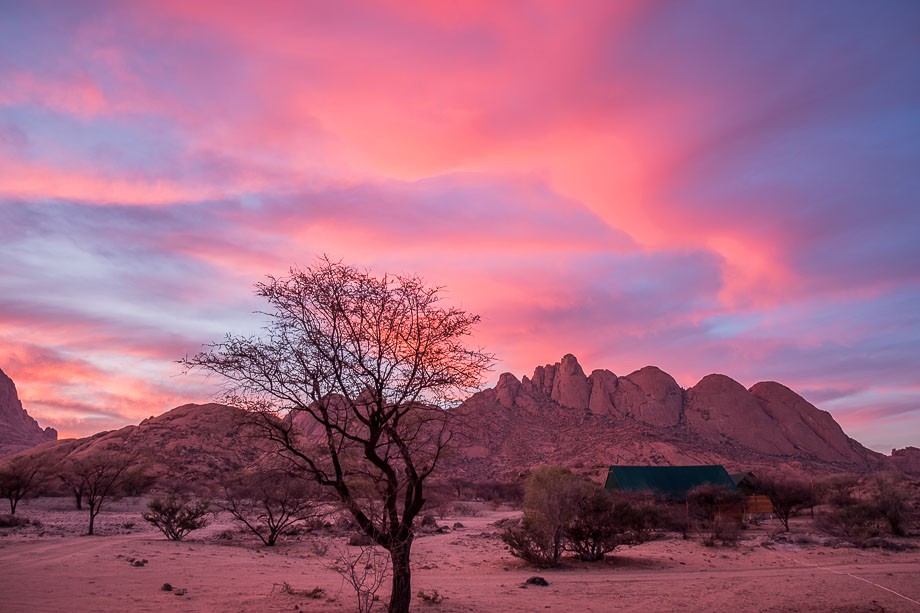 The penultimate leg of our epic road trip across Namibia took us from the former German colony Swakopmund to Etosha National Park, the number one tourist attraction in Namibia.

Spitzkoppe (pointed dome) is a group of granite rocks over 120 million years old in the Namib desert. Its a special place featuring rock paintings from Bushmen, the original hunter-gatherers of southern Africa. To see the Bushman’s paradise, you have to get a guide and hiking options are limited. We heard stories of hikers making it to the top and having to be helicoptered down. We stayed at the Spitzkoppe Tented Camp , an insider tip. We almost had the camp entirely to ourselves with magnificent views of the mountain and spectacular sunset. There are only 3 campsites each with private shower and toilet. Ostriches frequently came into our campsite.

Brandberg (burning mountain) is the highest mountain in Namibia. There are plenty of rock paintings including the famous “white lady”. Unfortunately, the mountain was closed for hiking due to desert lions in the vicinity. We stayed at the White Lady Lodge. We did the desert elephant tour and got so close to the elephants, they could have practically reached out and touched us. We also did a cultural tour of a local village. The White Lady Lodge has an amazing cactus garden and amazing sunset views.

Twyfelfontein is a UNESCO world heritage site featuring thousand year old rock paintings. Other attractions in the area such as the Organ pipes and Burnt mountain were distinctly underwhelming. Note, the roads in the area are extremely bad, making for a slow, uncomfortable journey. Make sure to call in on the Twyfelfontein Country Lodge for a drink and enjoy spectacular views of the area.

After a night in a shitty campsite, we decided to treat ourselves and book into a lodge. We chose one half way to Etosha to break the journey. We stayed in the Ugab Terrace Lodge, which we found randomly in the Wheretostay book, having no WiFi in the crappy campsite in Twyfelfontein. It was expensive (100 € per person, per night), but well worth it. The Lodge is on small plateau with panoramic views of the desert with bizarre rock formations, including the Vingerklip. We enjoyed the lunar eclipse and saw the sunrise from our bedroom window.

Read the final instalment of our epic trip here.